How I Became A Nurse Coach By Accident

The truth is, I never knew I would become a Nurse Coach.

In fact, I had an entirely different path all planned out.

Like most of you, I come from a working-class family. And what’s the fastest way to advance your life when you come from that background? You earn more money. And what’s the highest-paying, non-managerial position in nursing? Nurse Anesthesia.

So, that’s what I grew up knowing I would do. In fact, I have a distinct memory of sitting at the dinner table when I was around 10 years old, practicing how to say “Nurse Anesthetist” over and over again with my mom. That’s a tough word for a kid, and I must have practiced it a few hundred times before I got it right.

When I grew up and entered the real world of nursing, I was enthralled by the seamless blend of human relations, high-tech healing, and critical thinking. And in an acute care setting, I crushed it. If you were at all sick – if you found yourself in any type of emergency, or if you just had open-heart surgery – I was the exact nurse you wanted by your bedside.

I was relentlessly focused, universally aware, super careful, and able to prioritize.

I would quickly build rapport with anyone from any walk of life. And I excelled at rapidly checking off bullshit documentation boxes on the computer so that I could spend more time with you and your family, helping you heal from whatever mess life decided to throw at you that week.

In fact, towards the end of my seven years in ER and CVICU, I even hired a private tutor so that I could relearn algebra and pass the GRE. Yuck. The goal was to spend the next three years learning nurse anesthesia.

My patient just had an $80,000 open-heart surgery and was now “prescribed” alcohol to be administered by yours truly. Oh, and not only was he 50+ lbs overweight, but three days later he was getting wheeled outside to go have a smoke.

Even my ER-hardened heart had a ‘WTF am I doing’ moment. You know what I’m talking about – one of those moments where the universe gives you a direct download and upgrades your whole internal operating system.

And over the course of the next few weeks, I came to realize that so much of my career had been about holding up this system that didn’t make any sense. I just became so desensitized to all of the preventable suffering, that it had become my normal.

I’ll admit, part of me felt that making a pivot and pursuing Nurse Coaching was like abandoning everything I had worked towards. But the other part of me knew that I had no choice.

The more I learned, the more I realized that I couldn’t continue to take part in something that caused me moral injury every single day.

I was practicing in a way that was out of alignment with what I knew and believed to be right. My hands were tied by antiquated hospital policies that kept me from having honest discussions around lifestyle and wellness with my patients.

So, I made the decision.

The Truth About Why I Left Hospital Nursing

People make a lot of assumptions about why I stepped away from my role as an ER and CVICU nurse.

It wasn’t the fact that, as a man in nursing with killer hair, I’ve been called every name in the book.

It wasn’t the fact that I’d been assaulted, pushed, or shoved while caring for people.

It wasn’t the fact that I had to restrain a patient who was screaming she’d kill me while waving scissors in my face.

It wasn’t the fact that never once was I offered a grief counselor after more than two dozen of my patients transitioned to death.

I didn’t leave the hospital because I’d worked more 16-hour shifts than I could count when there was no backup. To clarify, I mean literally no one else was there to help and patients were still rolling in the door. I was so tired that I had to triple check medications to make sure I didn’t kill someone.

I didn’t leave the hospital because I was spending more time clicking boxes than caring for patients.

It wasn’t any of that.

It Was a Moment of Awakening

My moment of awakening was realizing that there were a million ways in which I desperately wanted to help my patient as he recovered from open-heart surgery, but the medical model I was a part of didn’t provide time or space for any of it. Why wasn’t he mandated to undergo smoking and alcohol cessation programs before an $80,000 surgery?

I watched him leave the hospital, a mere five days later, without any mention of what got him there in the first place.

Not one of his trusted medical professionals, including myself, explained to him that the lifestyle decisions he makes every single day are defining his future. The food he eats, the cigarettes he smokes, the weight he puts on, the number of drinks he opts for each night, and now, the countless medications he’ll be putting into his body for the rest of his life…

Not once was there a doctor’s “order” for me to educate my patient about how he can make sure this never happens to him again.

Not once was time made so that I could coach my patient to believe in himself, and to understand that he has control over his choices.

In that moment, I knew that we’d all failed him.

And as a result, I chose a new path.

So the truth is, I never knew I would become a Nurse Coach.

But now that I am here, I realize this is exactly the specialty I always wanted to pursue.

I took control of the path I’d taken in nursing, so that I can now help hundreds of nurses and thousands of patients take control of their lives and health too.

So that’s my story and I’d love to hear yours.

What was your “Moment of Awakening” in nursing and what change did it inspire within you?

Let us know in the comments below! 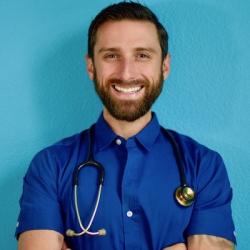 Peter Giza is a registered nurse, Board Certified Nurse Coach, and health and wellness expert. In addition to his work with The Nurse Coach Collective, he is an avid outdoorsman, musician, and traveler.

Helping nurses become Board Certified Nurse Coaches.
Be the change you want to see.
Heal your patients holistically.
Elevate your career.

Every nurse knows that drinking water is essential

Here are 3 simple changes you can make in your pra

Yes! Begin Your Training For Free.

You're about to make the best decision of your Nursing Career.

Just one step away from your 100% FREE training.